An Eccentric Buddhist from the 17th Century

Sangharakshita considered 17th century monk Ekaku Hakuin – one of the most

influential figures in Japanese Zen Buddhism – to be one of his most important teachers. Mandy takes a closer look at this interesting, eccentric and artistic figure to see how he influences our practices today.

Two main schools of Zen exist in Japan: Rinzai and Soto. The main difference between Rinzai and Soto is that Rinzai practitioners regard enlightenment as something that comes suddenly. Soto (which coined our practice of ‘just sitting’) sees enlightenment as a gradual dawning. Hakuin revived the Rinzai school, which had gradually declined since its beginnings in the 9th century.

Hakuin became a Buddhist monk when he was very young. He’d attended a terrifying lecture by a Nichiren monk about the Eight Hot Hells and decided that becoming a monk was the only way to escape them. When he was nineteen, however, he read the story of a Chinese Ch’an master’s brutal murder by bandits and was very upset to realise that even a great monk couldn’t be saved from a bloody death in this life. So he gave up the monastic life. Not wanting to return home in shame, he travelled around Japan studying literature and poetry.

But while studying with the poet-monk Bao, he had an experience that put him back on course. Struck by piles of books put out in the temple courtyard, books from many differing schools of Buddhism, he prayed to the gods of the Dharma to help him choose a path. Then he picked a book at random. It was a collection of Zen stories, and he dedicated himself to the practice of Zen for the rest of his life.Hakuin’s early exertions affected his health, and while he was still relatively young, he had a nervous breakdown. He called it Zen sickness and sought the advice of a Taoist cave dwelling hermit, who prescribed a visualisation and breathing practices. These eventually relieved his symptoms and from then on,  Hakuin emphasised physical strength and health in his Zen practice. He often spoke of strengthening the body by concentrating the spirit. In his seventies, he claimed to have more physical strength than in his thirties and was able to sit in zazen meditation or chant sutras for an entire day without fatigue.

‘At the bottom of great doubt lies great awakening. If you doubt fully, you will awaken fully’

Zen students came from all over the country to study with him. His teaching (like his own practice) focused on zazen (sitting meditation) and koan study. A koan is a condundrum that you can’t solve with logic. However, the mind still tries to solve it, and the ensuing psychological pressure is meant to create a tension that leads to awakening. Hakuin called this ‘great doubt.’ ‘At the bottom of great doubt lies great awakening. If you doubt fully, you will awaken fully.’

Hakuin created a fresh system of koans, classified into five different grades to help students progress towards enlightenment. He drew on Chinese classics and wrote some of his own, for example: ‘You know the sound of two hands clapping: tell me, what is the sound of one hand?’

One of his major concerns was the danger of what he called “Do-nothing Zen” teachers who, reaching some small experience of enlightenment devoted the rest of their life to, as he put it, “passing day after day in a state of seated sleep”.  He himself stressed a never-ending and severe training to deepen the insight of enlightenment and develop one’s ability to manifest it in all activities. His motto was ‘meditation in the midst of activity is a thousand times superior to meditation in stillness.’

Well known and popular during his later life, Hakuin was a firm believer in bringing Zen to all people. He was a spiritual father to the rural population in particular, encouraging them to live virtuous lives. He travelled all over Japan to speak on Zen and wrote frequently in his last fifteen years. He wanted to record his lessons and experiences for posterity in a very accessible way so that ordinary people could understand them.

This desire was also what motivated him, at the age of sixty, to take up painting and calligraphy. His paintings were meant to serve as visual sermons and were very popular among laypeople, many of whom were illiterate. For Hakuin, art was a means to teach the dharma. He is thought to have created tens of thousands of works, all in his own style. His bold, spontaneous brush strokes came to represent popular ideas of Zen art.

‘A nice hot kettle of stew, and he plops a couple of rat turds in and ruins it!’ 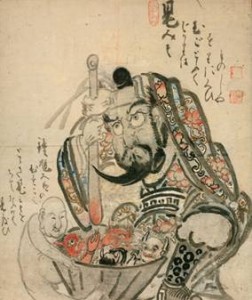 inscriptions from popular songs and advertising, not just Zen literature. He also wrote letters, poems, chants, essays and dharma talks. One interesting example is his ‘Acid comments on the Heart Sutra.’ Of the lines so familiar to us, ‘Form is no other than emptiness, emptiness only form,’ he says of the writer, ‘a nice hot kettle of stew, and he plops a couple of rat turds in and ruins it!’

Hakuin was inevitably the hero of apocryphal tales. For example, an unmarried girl who lived near his temple was found to be pregnant. Her outraged parents demanded to know the father. The girl wanted to protect her lover, so she accused Hakuin, now an old man, of seducing her.

At the age of 83, this remarkable man died in Hara, the same village in which he was born and which he had transformed into a center of Zen teaching.