In Phillippa Plock, Leeds Buddhist Centre has an Art History expert in its midsts! In this article she explores two books that have had a positive impact on her Dharma practice.

For keen eyes that regularly scan the library shelves, you may have noticed recently the addition of two books in the art section: Smile of the Buddha: Eastern Philosophy and Western Art From Monet to Today by Jacquelynn Baas and The Sight of Death by T. J. Clark. I have donated these to the Centre, and I’ve also sent copies to Adhisthana for their library, and I wanted to write a short article explaining why I decided to do this.

I was prompted to donate the books after reading Sangharakshita’s books The Religion of Art and In the Realm of the Lotus. Like these books, the two books I have donated have been really inspiring for me in thinking about how to bring together my love of Western art – I have been lucky enough to study art history to PhD level and continue to work with art in my job – and my Buddhist practice, and I wanted to share them with the Leeds sangha.

I’ll start by explaining why I like the book by Jacquelynn Baas, The Smile of the Buddha. I found this book a couple of years ago when I was searching for books to do with how Western thinkers who had come into contact with Buddhist ideas (like Jung) may have influenced 20th century artistic culture. I was drawn to the title as it seemed to be exactly what I was looking for. Reading it, I was really amazed to see how many familiar artists were interested in Buddhist philosophy and art, and tried to incorporate these ideas and forms into their art work and how they practiced as artists. I was struck by a realisation that the so-called ‘Western’ modern art tradition has in fact been a repository for Buddhist aesthetics, philosophy and practice from at least the 1850s if not before. I have come to believe through my own experience that it was my love of western art that made me receptive to Sangharakshita’s writing about the Buddha – that’s why it felt so familiar and right when I first encountered it- because I had in fact been soaking up similar ideas through my love and study of Western art history from a young age. 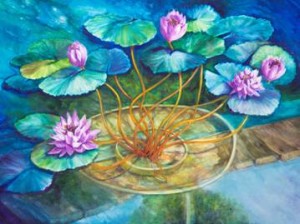 Impressionist artists were deeply influenced by Japanese prints, and considers how the ideas, philosophy and practices of Buddhism actually accompanied these prints into French culture of the mid to late 19th century, and filled people with new ideas of how to live as well as how to picture the world. I didn’t realise that artists in 20th Century USA also took advantage of the influx of people and ideas from Japan and China to expand their way of perceiving and being in the world. It seems obvious that Monet’s famous paintings of water lilies have a connection with lotus flowers growing in water. I really didn’t know that Van Gogh was inspired by the Bodhisattva ideal and painted a self-portrait of himself as a Buddhist monk. It seems unsurprising now to know that Georgia O’Keefe read Buddhist literature and that Jasper Johns was interested in art practice as a form of meditative absorption. What I think is also really exciting is Baas’s hints at earlier interests in Buddhist ideas such as the landscape designers of the 18th century and the Romantic artists of the early 19th, as well as the philosopher Schopenhauer and the composer Wagner.

The enjoyment of going to an art gallery can be transmuted into a deep moment of teaching and insight!

Baas’s book has definitely made me more attuned to how works of ‘Western’ art can be carriers of the Dharma – and how aspects of the Dharma can be revealed to me in the process of looking and experiencing them. The enjoyment of going to an art gallery can be transmuted into a deep moment of teaching and insight! 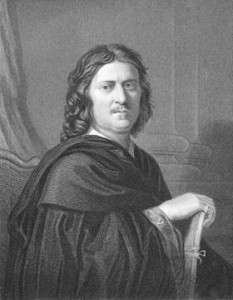 The second book I have donated, T. J. Clark’s The Sight of Death, is not Buddhist, but is, I think, a wonderful example of how looking at a work of art can be a profound meditative experience that involves not only mindfulness, but a compassionate and ethical approach to a work of art and ultimately to humanity. The author focuses on two paintings by Nicolas Poussin in a very experimental way of writing art history. He rejects other art historians’ attempts to ‘fix’ the meanings of works of art, and is also deeply concerned about how images have become so powerful without us realising it through our instant and saturated visual culture. By attempting to engage through all his senses and faculties with Poussin’s work, I think what Clark is trying to show us is how a deep and mindful encounter with a work of art can produce a space of radical opposition to the reactionary mode in which most of us usually respond to visual stimuli.

Throughout the book he becomes increasingly aware of the layers of meaning, memory, historical research, perception, etc, etc, he brings to the painting before him. And he becomes increasingly aware of the necessity of bringing an ethics to this encounter – to respect something about the painting and its history, as well as the frailness of its material state – subject to decay and destruction. In some senses, he becomes deeply aware and sensitive to the suffering of all things in our world- subject to decay and death – through his practice of responding to a beautiful painting. I think what Clark is exploring is the very process through which a very active encounter with a work of art can transform us radically.

It is difficult to do the book justice in a few short lines, but I hope I have communicated something of this book’s potential for me as someone who loves looking at old western paintings that don’t, on the face of it, have anything to do with the Buddha – but seem to open my mind in ways that enhance my practice!

I do hope you enjoy browsing these books in the library.