Meeting the Buddha – Dedicated to Rosemary on her Going Forth

Samanartha writes: This article is based on a talk I gave to celebrate Rosemary’s leaving for her Ordination retreat. In it I’ve tried to evoke, if somewhat briefly, some of the myth and hence the importance of what she has embarked on.

Firstly, what do we mean by ‘the mythic’ or ‘myth’? In a Buddhist context we don’t use the term ‘myth’ in the sense of something not being true. Instead, the mythic is something like a deeply held belief, story, or organising principle that creates a sense of meaning and purpose in our lives. These myths are not ones in which we are observers but are something that we participate in and actively live out. For example, I’m a great uncle and when visiting my family recently I could see that living out the myth of the family is very important to them. It carries a strong sense of purpose and even of meaning for the people involved and is something that is obviously lived out. This, of course, is fully supported by society and is a very strong myth indeed. 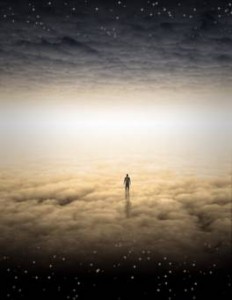 For some people, however, to only live out these common myths – such as those of the career or the family – seems lacking and unsatisfying in some way. And this propels some people to begin a search, a quest for something else, something that may include the myths of the career and family but is ultimately a vastly bigger myth. It is this quest for greater meaning that explains why many people arrive on the shores of Leeds Buddhist Centre.

“In a way the Buddhist path is dangerous! It will turn us upside down and inside out in our quest for meaning”

Having arrived, some people have a positive response to what they find, at least enough to keep them coming back, and eventually they begin to explore what it might mean to be and to live as a Buddhist, and what it might mean to have a ‘spiritual’ dimension to their lives. For this to happen in a meaningful way, our hearts and imaginations have to be activated. Until that happens, we’ll find that what we are doing is rather theoretical. Buddhism and the Dharma is something to be lived and our quest is to live and explore that more and more fully on a day-to-day and moment-to-moment basis.

However, this process comes with a health warning. In a way the Buddhist path is dangerous! It will turn us upside down and inside out in our quest for meaning. We begin to ask ourselves whether we should hold back or whether we should surrender to what we might poetically describe as the endlessly fascinating cry of the wild geese, or the heart’s howl!? This dilemma is beautifully described in the following poem by Rainer Maria Rilke.

Who if I I cried out would hear me among the hierarchies of angels?
And even if one pressed me suddenly against his heart:
I would be consumed in that overwhelming existence.
For beauty is nothing but the beginning of terror,
which we still are just able to endure,
and we are so awed because it serenely disdains to destroy us.
For every angel is terrifying.
And so I hold myself back and swallow the call note
Of my dark sobbing.
Ah, whom can we turn to
in our need? Not angels, not humans,
And already the knowing animals are aware
That we are not really at home in
Our interpreted world
– Rainer Maria Rilke

Last week we had Louise and David’s mitra ceremony. In this ritual they publicly expressed and celebrated something internal and personal to them – their heart’s response to the Dharma. In expressing that, and having it publicly witnessed they became part of the mitra sangha (which has a positive effect not only on them but also on those who have already joined that sangha). They made a commitment to exploring what friendship might be and exploring what the Buddha was pointing to, and to do so within the context of the Triratna Community. They will now go more deeply into both of these areas and they might begin to touch unknown and possibly uncomfortable territory.

“We are walking into the scrublands that lead to a great forest, the great Unknown that the Buddha, Shakyamuni, plunged into…”

For some of us, we wish to quest more deeply still into this territory. Our hearts are moved to

such a degree that we ask to join the Triratna Buddhist Order. We wish to make The Three Jewels – the Buddha, Dharma and Sangha – central to our lives. We may have a job and a family but we want to find out how this can all be held within a context of living out and embodying more and more fully what the Buddha himself exemplified in terms of wisdom and compassion.

So as an individual we ask to enter the ordination process. We join a band of men and women, a group of friends who are also traversing this path. This is important because it means we’re engaging with others who are similarly exploring this, treading this path to the same extent as we are. We are walking in the scrublands that lead to a great forest, the great Unknown that the Buddha, Shakyamuni, plunged into at the moment of his great going forth, and where if we go too, we will encounter the Buddha.

Rosemary has been in this process for some time and a new and important part of the journey began on the night of her leaving ceremony. Rosemary has gone. She has left us and set off on her own to join up with a group of women who, like her, are now mythically and ritually going to plunge into the forest, the Unknown, and hopefully encounter the Buddha.

“What you held in your hand, what you counted and carefully saved, all this must go”

Before you know what kindness really is
you must lose things,feel the future dissolve in a moment
like salt in a weakened broth.
What you held in your hand,
what you counted and carefully saved,
all this must go so you know
how desolate the landscape can be between the regions of kindness.
How you ride and ride
thinking the bus will never stop,
the passengers eating maize and chicken
will stare out the window forever.

Before you learn the tender gravity of kindness,
you must travel where the Indian in a white poncho
lies dead by the side of the road.
You must see how this could be you,
how he too was someone
who journeyed through the night with plans
and the simple breath that kept him alive.

Before you know kindness as the deepest thing inside,
you must know sorrow as the other deepest thing.
You must wake up with sorrow.
You must speak to it till your voice
catches the thread of all sorrows
and you see the size of the cloth.

“We don’t know what her name will be, or even who she’ll be”

So Rosemary has now reached the part of her journey where she has left us.
She has let go of being Rosemary in the Leeds sangha. She has travelled to Akasavana in Spain, 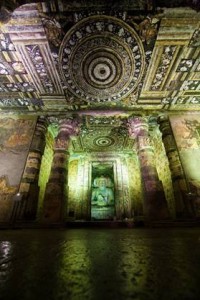 which is a bit like the tigers cave. Many footprints lead up to the cave but none return. Rosemary has entered the valley, but this is a one way trip – she will not return! With her band of sisters there will be more letting go. An identifying and letting go of all those places where she hid and and tried to not take responsibility for herself. She will move into a period of silence and more giving up, of travelling deeply into herself and and letting go of views, ideas and opinions that cause separation and pain for herself and others. And then at some point in the retreat she will leave this band of fellow questers. She will walk on her own to the ordination kuti. And there she will give up her name and in doing so, mythically and ritually, she will meet the Buddha.

Lastly, even though all this can only be done by Rosemary as an individual it is not done in isolation. We’ve played an important part in the process and we in turn are being affected by the steps Rosemary has taken.

When we witnessed Rosemary leaving and going forth from Leeds, when we rejoiced in her merits and wished her well we all helped to create a sphere of positivity around her – a protector of the mind to support her on her journey to meet the Buddha. We all helped to establish the best conditions for Rosemary to see that …

“The Indian in the white poncho
lying dead at the side of the road could be her,
that he too was someone who journeyed through the night with plans
And the simple breath that kept him alive.”

…and for that seeing to deeply change her. To get a glimpse of what the Buddha’s compassion really is and then to return anew. We don’t know what her name will be, or even who she’ll be, all we can know is that she will return with the aspiration to engage with Bliss-bestowing hands burnt into her soul.

Rosemary is now Sagarabala. She returned from Akasavana in Spain in July 2014